* Author of thirty romance novels, Emily Mims combined her writing career with a career in public education until leaving the classroom to write full time. The mother of two sons and grandmother of six, she and her husband Charles live in central Texas but frequently visit grandchildren in eastern Tennessee and Georgia. She plays the piano, organ, dulcimer, and ukulele and belongs to two performing bands. She says, “I love to write romances because I believe in them. Romance happened to me and it can happen to any woman-if she’ll just let it.”

Today Emily Mims will be talking about the first book she read that had an impact on her.
* When asked to do a blog on the first book I read that had an impact on me, I had to do some thinking. I can hardly remember a time when I could not read. I was one of those lucky kids who learned quickly easily, and was already reading for fun by the time I was in the second grade. I of course read a lot of ‘good stuff’-children’s classics like Johnny Gruelle’s Raggedy Ann series, the Bobbsey Twin mysteries, all the little blue biographies offered by my elementary teachers. I was also taught out of the Bible and other religious material. But the book that had the greatest impact on me as a future romance author was a Reader’s Digest condensed version of Victoria Holt’s ‘Mistress of Mellyn’. It was my first romantic suspense novel, and firmly cemented my love for the genre.
* I encountered this book on one of my summer vacations at my Granny Johnson’s house in the tiny town of Waelder, Texas. Granny’s house in Waelder was a magical spot for a city kid. Granny and Grandaddy were cattle ranchers. They no longer lived out on the ranch itself, but there was a five-acre lot behind their big Victorian house where they kept a mean old milk cow and their cow ponies that Daddy would saddle up for me to ride. There were cousins to play with, and I spent many a happy hour riding around in the back of my cousin’s three-wheeled scooter. I shelled peas and looked at old picture albums and sewed doll clothes and thoroughly enjoyed being spoiled to death by my loving grandparents.
* There was down time, too. It was during that down time one summer that I found Granny’s Reader’s Digest book and picked it up to read. I must have been eleven or twelve by then, old enough to have grown out of the comic books she bought me and ready for something a little more mature. I picked up the book and sat down and started reading…and I was hooked! I loved everything about the story-the innocent young governess, the handsome, broody hero, the lonely child, the wife who died under mysterious circumstances, and the haunted old mansion. I didn’t know it at the time, but in retrospect I can see that Victoria Holt successfully incorporated every element that made for a good gothic romance and wove them into magic. Or at least what was magic to me, a young, first time reader. It’s been over fifty years, but I can still remember the shocking ending to that book as though I read it yesterday.
* I didn’t stop reading with just that one. I became a steadfast fan of Victoria Holt and others who wrote like her. As the years went by, I sought out more books in both the mystery and the romance genres. I love a straight mystery a la Faye Kellerman and Linda Fairstein, where I’m pitting my brain against the author’s and trying to successfully predict the ending. But when it came time for me to try my hand at writing, it was romance that I wrote. I started with straight love stories, but started adding elements of suspense when I wanted to write a longer book. All the longer books in the Texas Hill Country series have suspense in them, as do the first two of the Smoky Blue series. And while my heroines are not virginal governesses and my heroes bear only a passing resemblance to Connan TreMellyn, I have Victoria Holt and her wonderful story to thank for introducing me to world of romance and romantic suspense between the pages of a book. 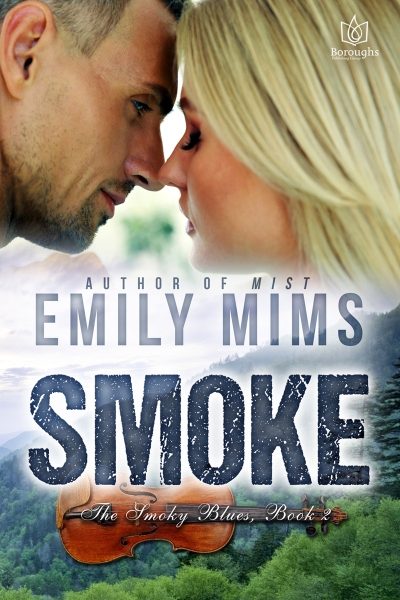 * A concert violinist and musical prodigy, Francesca Giordano is internationally acclaimed and always in the spotlight—right where she doesn’t want to be. Not after she’s witnessed a murder. Suddenly on the run, she finds her way to Bristol, Tennessee, and to the music club Acoustics. There, as “ Chessie Hope,” she can hide out in the open. But with this newest gig comes a different kind of danger. Older and impossibly sexy, bluegrass singer Cooper Barstow is everything she’s ever wanted in a man, and his daughters are just as easy to love. Yet Francesca cannot enjoy the luxury of such a relationship, not even if he could protect her from the men on her trail or if she could be honest with him about who she is. Cooper is as wounded as he is strong, and he needs someone who will stay by his side for the rest of his life. Just as Francesca does. And the smoke on the mountains and the haze of desire almost make her believe that could happen.

* Cooper hit his front door and took the quickest shower on record. Still, he was almost a half hour late by the time he pulled into Chessie’s driveway. Hopefully she would understand. He was about halfway across the yard when he heard music coming from somewhere inside the house. He slowed down and stopped, listening in astonishment to the outpouring of a violin, a violin in the hands of an incredibly gifted musician. Who was playing the violin? Was Chessie a closet classical music fan? Was that a recording, or was that Chessie herself making this incredible music?
* Cooper glanced in the window and his mouth fell open. It was Chessie. She was standing in front of the window in her pink cotton robe, her fingers flying over the strings so fast they were a blur and her bow moving nimbly over the strings as she made that violin sing. It was Chessie making that incredible music. Music that Jake never in a million years could have made. Music that he himself could never have made. Music that required more talent and technique that she would ever need as a bluegrass fiddler. Music that somehow seemed strangely familiar, even though he didn’t think he’d ever heard it before. Cooper suddenly thought back to his initial reaction to her, the first time he heard her play. He wondered then why a woman of her talent played bluegrass music.
* Now he knew. She didn’t play just bluegrass music. She played classical music too. And she played it wonderfully.
* Chessie Hope was not the simple bluegrass musician she presented herself to be.

Thank you for joining us here today, Emily Mims! It was a pleasure getting to know you and your story.

ANNOUNCEMENT! Emily Mims will be awarding a $10 Amazon or Barnes and Noble GC to a randomly drawn winner via rafflecopter during the tour! So be sure to leave a comment AND use this RAFFLECOPTER LINK to enter the drawing. Also, visit the other tour stops for a greater chance of winning!