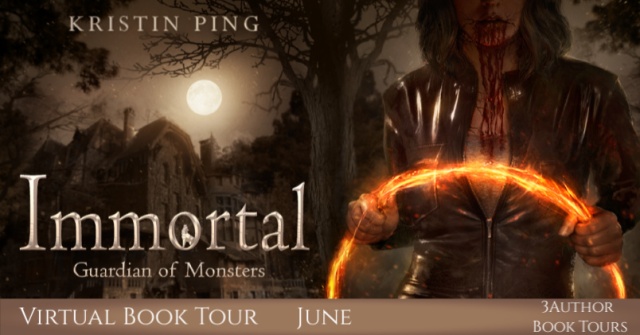 
Description: Natasha’s life begins the night she is turned. With the ability to channel fire, a gift that only belongs to the witches, she becomes a terror— not only to the packs, but all the supernatural breeds. She’s known as Blaze. The deadliest vampire out there.But Blaze has a secret. She didn’t want to become a vampire, she needed to become a vampire, and her reasoning is lost. It died the night her human life did.Her conscience activates when two varcolacs visit the covenant, looking for allies for the Great War.
What was it about the Varcolacs that made her grow a conscience? And will she be able to outrun it to keep the title of terror? 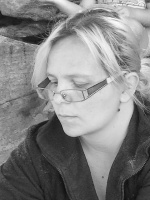 Kristin is a USA Today Bestselling author and lives with her family in South Africa, where she writes full time.
Her debut novel, Immortal: A Varcolac Novel, followed by Hinder: A Benders Novel, are the first two novels in a sweeping saga called Guardian of Monsters. Nine intricately imagined novels are in the works, following witches, vampires, werewolves, djinns, Benders, and shifters.

Natasha
2058 – Present
I shifted uselessly against my bonds and gasped as the metal dug into my skin. The chains and heavy locks that shackled my arms and legs to the stiff chair beneath me were made of UVS metal, among the strongest and deadliest metals to our kind. It weakened us so badly that we didn’t even have the strength of a mere human.
I winced at the pain throbbing in my neck. Werewolf bite.
It was a known fact that vampires did not live long, seven days at most, when bitten by a werewolf. Nobody here would suck out the venom, and no one was coming to my rescue.
Tonight’s events played through my mind in vivid detail.
Cass had let me go. After so many years, she finally let me go. But when I saw Vladimire and Francine, I knew it had all been a lie.
Alex and Leigh never stood a chance. Varcolacs were no match for werewolves. They weren’t as strong and their bodies couldn’t hold the Stra-vain—a concentrated dose of a rare plant that allowed werewolves to transform at will—in their system. Varcolacs had to wait for the full moon.
A few nights ago, when I was camping under the moonlight with Alex and Leigh, I’d thought I was the luckiest vampire in history. I had been given a second chance at life. An opportunity to make something good come from evil.
But that second night, when Alex smelled wolves on our tail, I knew it was just one of Cass’s cruel games.
She’d lied when she told me I could be with Alex, that she knew what it felt like to be in love with a Varcolac. She’d never intended to allow me to leave—not her precious Firebird, Natasha.
But never in a million years had I thought she would send my werewolf children to drag me back home.
What had she been thinking? That I wouldn’t kill them? Or harm them?
When they attacked, I took on Vladimire first. Vladimire, who was like a son to me. I still remembered the day I went to pick him up, or really the day I stole him and his twin sister, Francine.
There in the woods, at first, I couldn’t find it in myself to kill him. I tried to scare him with my fire. That hadn’t made him back off, and he’d taunted me, telling me I didn’t have it in me to burn him alive. He was wrong.
Francine had attacked Leigh, and Alex had tried to help. His foot triggered a bear trap, but he still fought as hard as he could. Leigh and Alex tried their best to kill Francine.
I aimed my merciless fire at Vladimire, my Vladimire. Watching him die by my hands ripped my heart to shreds, but I knew it was either us or them.
When he was a charred corpse, I steeled myself to attack Francine next.  Killing her should be easier than Vladimire—she was the more sadistic of the two.

Book two, Mine Immortal is now available for purchasingon all online stores. 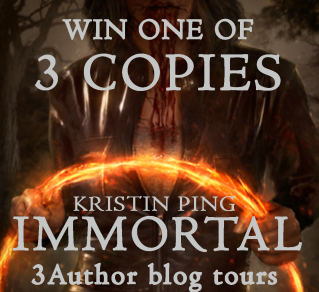