* Lynn Burke is a full time mother, voracious gardener, and scribbler of spicy romance stories. A country bumpkin turned Bay Stater, she enjoys her chowdah and Dunkin Donuts when not trying to escape the reality of city life. 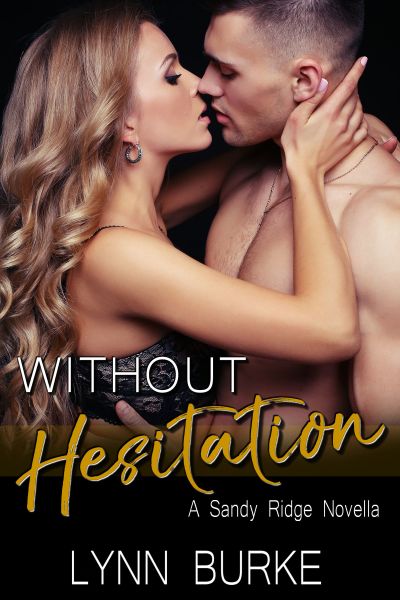 * Dumped like a bag of misshapen clay four months before her wedding, grade-school art teacher Mindy Hughson has no intention of opening her heart to anyone ever again. Hookups and one-night-stands fill the ache of abandonment—but still leave her wanting.
* Attempting to find peace from the shattered pieces of her past, Mindy returns to Sandy Ridge where she’s drawn to the cabin’s owner, Gage Hart. A carefree fling with a ripped hunk of fuck-a-licious beefsteak is just what she needs to fill the emptiness she feels inside. But Gage’s sexy smirk, lone dimple, and deep stare demand more than just the press of her body against his. He wants her love. With his mere presence threatening her resolve to keep things simple, will the pain of her past force her to flee? Or will Mindy dare to open her heart to Gage without hesitation?

* “Sure you don’t mind my taking off like this?” Mindy asked while putting her second earring in and standing in the cabin’s back doorway.
* “Not at all.” Kayla stretched her legs out toward the fire she’d made in the fire pit on their back patio, a box of graham crackers, chocolate bars, and a bag of marshmallows on the table beside her. “I’m going to make myself sick on s’mores and beer, maybe text Detective Ford a few times to see if he’ll bite at an offer for phone sex, then I’ll pass out.”
* Mindy giggled—more from nervousness than Kayla’s plans. “Good luck with the phone sex.”
* “Thanks.” Kayla puffed a breath between her lips. “God knows, I’m going to need it.”
* Fluttering her fingers, Mindy made for the front of their cabin, grabbing a sweater and her purse on the way.
* She’d agreed to meet Gage at his car at five, and while she felt bad skipping out on Kayla, her friend honestly didn’t seem to mind. An only child, Kayla claimed she enjoyed quiet “me” time and had often taken off for her daddy’s house when Mindy and Meg had smothered her in their apartment.
* “Bring me back some Sour Patch Kids!” Kayla’s holler carried in the clear mountain air.
* “You got it!” Mindy yelled back with a laugh, picking her way through the trees between the two cabins’ driveways.
* Gage waited for her beside his truck, jeans fitting his thighs and bulge the way a man’s jeans ought to fit, black t-shirt hugging every swell and dip of his upper body. He didn’t move while she approached, but his gaze slid down over her and back up in the lingering way that flushed Mindy through with heat.
* Strappy sandals and a short, pale-green sundress were the best she could come up with. Not having expected to find someone to hook up with while at the secluded Sandy Ridge cabin, she’d packed mostly for comfort.
* “Damn, woman,” Gage said as she drew closer.
* “You like?” she asked, twirling around for him.
* He shook his head, but his smirk and dimple told her the truth of his thoughts. “Get in the car before I decide to say to hell with dinner and drag you inside the cabin.”
* Mindy’s breath caught. “I’m game for that…”
* Gage pulled open the passenger door and motioned her forward. “In.”
© Lynn Burke 2018

Thank you for joining us here today, Lynn Burke! It was a pleasure getting to know you and your story.