* Donna Galanti is the author of the paranormal suspense Element Trilogy (Imajin Books -http://www.imajinbooks.com/ ) and the children’s fantasy adventure Joshua and The Lightning Road series (Month9Books -http://www.month9books.com/ ). Donna is a contributing editor for International Thriller Writers the Big Thrill (http://www.thebigthrill.org/) – magazine and blogs with other middle grade authors at Project Middle Grade Mayhem (http://project-middle-grade-mayhem.blogspot.com/search/label/Donna Galanti) . She’s lived from England as a child, to Hawaii as a U.S. Navy photographer. Donna enjoys teaching at conferences on the writing craft and marketing and also presenting as a guest author at elementary and middle schools. 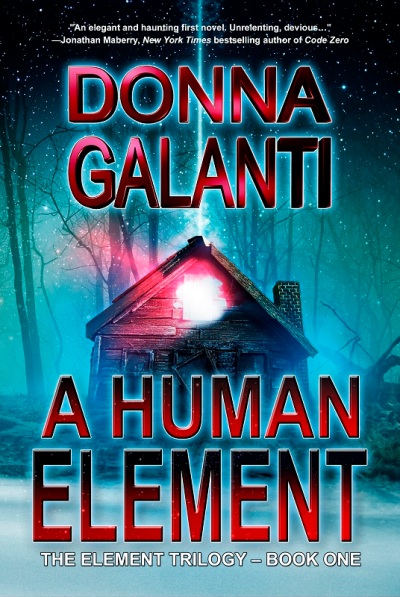 Evil comes in many forms…
* One by one, Laura Armstrong’s friends and adoptive family members are being murdered, and despite her unique healing powers, she can do nothing to stop it. The savage killer haunts her dreams, tormenting her with the promise that she is next. Determined to find the killer, she follows her visions to the site of a crashed meteorite in her hometown. There, she meets Ben Fieldstone, who seeks answers about his parents’ death the night the meteorite struck. In a race to stop a madman, they unravel a frightening secret that binds them together. But the killer’s desire to destroy Laura face-to-face leads to a showdown that puts Laura and Ben’s emotional relationship and Laura’s pure spirit to the test. With the killer closing in, Laura discovers her destiny is linked to his, and she has two choices—redeem him or kill him.

* She planted her feet shoulder-width apart, and facing the woods, commanded its inanimate objects to obey her wishes. Her hands danced in fury as rocks and branches flew through the air toward one another.
* She stripped off her sweater and turtleneck, now damp with sweat. The sun hit the lake from the treetops burning off the fog, shooting millions of sparkles across the water toward her. But Laura closed her eyes to the beauty and fought her war with evil.
* The sounds of her battle echoed around the lake as wood and stone broke against each other. She was a creature of nature and hypnotized in the darkness of her mind as she fought. She shrieked with bitter triumph.
* Then exhaustion overcame her and her rage drained away. She sank to the ground, weeping. The pain of her many losses overcame her. How could she win against something she didn’t even know? But she did know one thing. She and this killer had to be connected. Just as she was connected somehow to the man she sensed deep in the earth here all those years ago. She rose up on her knees and threw back her arms wide open in protest, her chest reaching out toward the sky.
* “Just come and get me you bastard! I’m ready!” She opened her eyes and squinted from the sunlight now all around her.
* “Laura,” a voice called softly from behind her.
* She jumped up and turned around to see Ben standing by the shoreline. The adrenaline that had surged through her body disappeared. She felt weakness crash over her in waves. She couldn’t form words to say. Tears still streamed down her face.
* She reached out a hand to him and it shook. She stared at it as if it weren’t part of her body and she tottered on her feet. Ben lunged toward her and caught her before she fell.

Purchase books 1 and 2 in the Element Trilogy
CLICK HERE

Thank you for joining us here today, Donna Galanti! It was a pleasure getting to know you and your story.

ANNOUNCEMENT! Donna Galanti will be awarding a $15 Amazon or B/N GC to a randomly drawn winner via rafflecopter during the tour! So be sure to leave a comment AND use this RAFFLECOPTER LINK to enter the drawing. Also, visit the other tour stops for a greater chance of winning!

My broken heart is aching. I have a hole within myself that I don't know what to do with right now. Selfishly I wanted a few more years. My poor sweet boy. I hope your body is healed now and you're playing like a kitten once more. May my guides care for you until we meet again. Love you, Marius. Miss you terribly. We had too short of a time period together here on Earth.
Trying to quell some triggers and keep the looming feeling of crisis at bay, but it's getting tough. I remember when I painted the two pieces of art and how I felt then. It's a state of mind I don't wish to return to bc it's possible I might not be strong enough to fight the demons again. To top it all off our kitty is still in the hospital fighting for his life and my heart... 💔.
Yep. Over the past several months I've realized I "travel" in my sleep. There are times when I'm really tired that I ask my guides if they could just let me rest and not "take" me anywhere. Sometimes it works. Sometimes it doesn't. And, yes, I can still function during the day. Strange but true.
LOL!
Yes to head, ears, & neck...
Hi all! Would love if you tagged me in their post! & give @bethdcarter a shout out too!