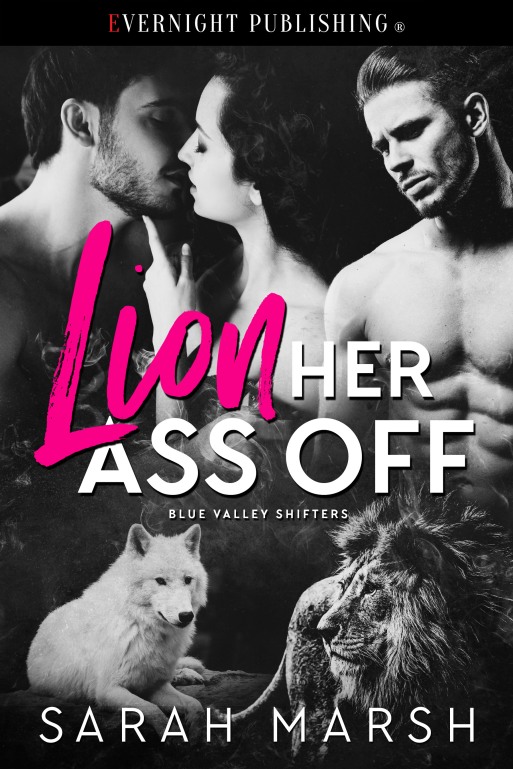 Lion Her Ass Off

Just like any other shifter, Julie always imagined meeting her mate and living happily ever after with the charming male of her dreams. Nothing could have prepared her for the shitstorm that was about to become her love life. With her luck though, shouldn’t she have expected it?

Hector has lived his life knowing that he’d become Alpha of Blue Valley one day. Turns out, acting like you always have it together and living it? Well, those are two very different things. He panicked when he first realized that his sister’s best friend was his mate, now he must rise to the occasion in hopes that he can salvage the rest of his life—but no pressure.

Deacon had no idea what fate had in store for him with a new start in Blue Valley, meeting his mate and her ‘plus one’ wasn’t it. These two are so mixed up in the past it seems almost impossible to make things right and move forward. Good thing he’s a professional. 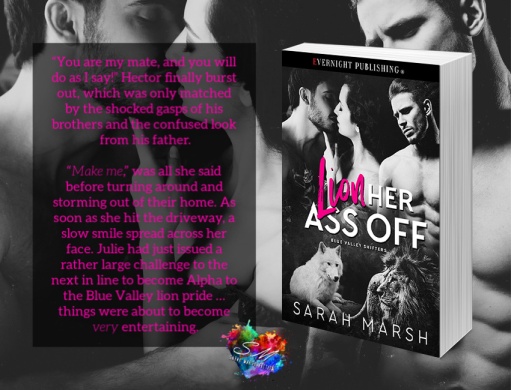 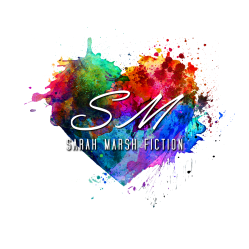 Sarah Marsh was born in British Columbia, she’s only recently began her writing career finding it the perfect outlet for taking the edge off a nine to five job. She’s a science fiction and romance junkie and when her imagination started to take the characters she’d read about even further in their adventures she decided to try writing something of her own.

Her biggest weaknesses are animals of any kind … she even loves the ones that wake you up at four in the morning because they can almost see the bottom of their food dish.

When it comes to life in general she’s a big believer that laughter is the best medicine and that there’s no such thing as too much love, which is why she’s such a sucker for a happy ending.

* ELIZABETH MONVEY is the pseudonym for a single mother from Los Angeles. She writes manlove stories, where the hero meets the man of his dreams because happily ever after is one of her favorite things. 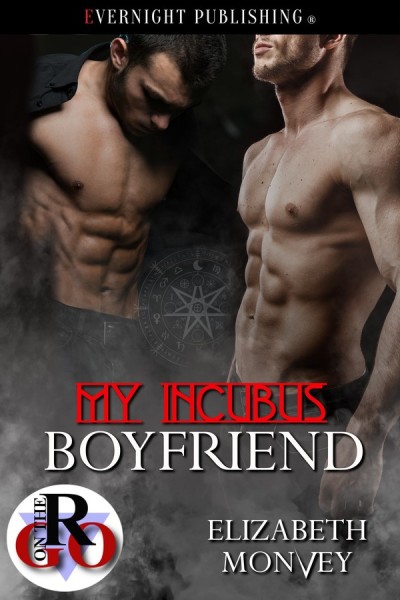 * Emmett owns an occult store. He firmly believes in magic. His boyfriend, Jackson, does not.
* Yet none of that matters because they are devoted to each other—until the night Emmett becomes the unexpected target of a sexual demon … an Incubus. Suddenly Emmett can’t remember their passionate nights. He’s slowly being taken over. And Jackson struggles with the realization that magic might just be real after all.
* Now Jackson has to step in to fight for his love before the demon completely consumes Emmett.
Be Warned: m/m sex

* He touched the cast iron rim, and a bolt of electricity seized through his body. Shocked, he cradled his hand as he backed away. The thing had never conducted such a static charge before, and he’d bought the things years ago at an estate sale from a known practitioner of Wiccan magic. Suddenly, everything about it now creeped him out, so Emmett decided to leave it be and head home. Gathering his stuff, he headed toward the door when suddenly a fierce wind whipped out of nowhere to encircle him.
* Frightened, Emmett stumbled back and tried to bat at the air that sucked the oxygen from his lungs. He couldn’t breathe. The swirling winds tore through him, bringing him to his knees. And as quickly as it had started, it abruptly ended, leaving him gasping.
* “You are a good vessel.”
* The whispered words echoed all around, and Emmett looked up to see a shadow approaching. Slowly, it took shape, coalescing into a tall, thin creature with horns protruding from the sides of its head. Fear sliced through him, and Emmett tried crab-walking away from it.
* “I will keep you,” the thing seemed to hiss. Its bright yellow eyes blazed with the heat of the sun. The thing solidified even more, turning into a man, one with chiseled abs, a beautifully sculptured body with a large cock and balls.
* “W-what are you?” Emmett cried out.
* “You will feed me,” it taunted, not answering his question. In fact, Emmett couldn’t see its mouth moving. “I will be you and you will be me.”
* It stopped at Emmett’s feet, and the thin lips twisted into some semblance of a smile. In a flash, Emmett remembered all he’d forgotten in the night before, and he remembered seeing this … creature? … before. It had rushed at him, making him collapse and pass out. And through the night, all the sex with Jackson had been because of this demon.
* “Tell me what you are,” he whispered, horrified.
* “I am a nightmare, induced to lie upon the unknowing. I have existed as far back as Mesopotamia and Samaria, to beget with women a demon hybrid. I thrive upon the sex of humans, no matter if be male or female.”
* Emmett wracked his brain for such a creature, finally coming to one horrifying conclusion. “You’re an Incubus?”

* I hate washing dishes but I love cooking. I hate washing clothes but I love wearing them. I try to write characters who aren’t cookie cutters, ones who are full of angst but where love redeems them. I push myself to write complicated situations that I have no idea how to resolve, forcing me to think outside the box. I hate people who don’t pick up their dog’s crap in public places and I really hate people who are rude and condescending. I especially hate discrimination in all and every form. The perfect birthday presents are gift certificates to bookstores. And I love to hear from readers. I’m really easy to find on Facebook or Twitter. 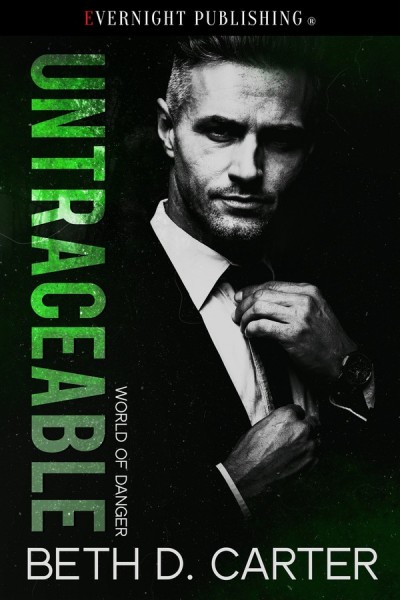 What would you like to tell readers about yourself?
Originally from Missouri, I live in Las Vegas, Nevada. By day I’m a pharmacy tech and by night I try to tap out some words on a page.

What book are you going to tell us about today? Is it part of a series? If so, what’s the order the books should be read in?
My book, Untraceable, is the second book in the World of Danger series. The first is titled Invincible and I have a third planned for 2020.

How’d you/your muse come up with this story?
That’s a funny story. I had originally wrote the beginning of it for a different series, but that never really got off the ground. It was supposed to an A-Team storyline, with four mercenaries kicked out of the Army and now fight for the innocent. Only I never really connected with the characters I had in mind. Luckily, I never got rid of it, and shifted those characters into this series, and this time…it worked!

Who’s your favorite character in the book & why?
Mae, because she’s me. I hope to many readers she’s very relatable because she has no other special ability than the memory of the books she’s read.

What’s your favorite line in the story?
I have a few favorites in this story. Here’s one section I think is pretty funny:
* “Why don’t you stay here while I-”
* A second later she had latched onto his arm. “No way. Where you go I go.”
* He tried to extract his arm, but she held fast, like a boa constrictor strangling its prey. “Mae. Let me go.”
* “No way, Jose. Haven’t you ever watched horror movies? The girl left behind always dies.”

* Mae Sawyer has a huge crush on her boss, JD Harlan, but he doesn’t even know she exists. She blends into the background of her data entry job, living for glimpses of him walking through the office. Then one night, everything changes. While working late, she’s caught up in a plot to kidnap him…and gets taken as well.
* They wake up in an underground bunker. No electricity. No way to be traced. Alone, they have to rely on each other to stay strong until their captor decides their fate. Danger lurks outside the bunker, waiting for a moment of vengeance.

* “Everything was well planned,” he muttered, coming to a stop in front of her. She lifted her head to look up at him. “Except it was set up for one person. You were unexpected, which makes me wonder why they took you instead of leaving you behind.”
* “Sympathy, of course,” she said immediately. “Collateral damage. You won’t do anything to escape if it means leaving me behind. Clearly I’m not made for hiking through a proverbial jungle so I’m your weakest link.”
* He looked her over, from head to toe. She wore comfortable business attire complete with sensible, low-heeled pumps. Definitely not made for a quick get-a-way if it came to that. But something earnest in her eyes caught his attention…a spark of fierceness that her drab clothing and persona tried to hide. A little voice in his head told him there was a lot more to Mae Sawyer.
* “I disagree with that,” he said thoughtfully. “You are not the weak link here.”
* She smiled and placed a hand on his arm, staring up at him with those remarkable eyes that managed punch him in his chest. Big. Brown. Absolutely guileless. When had he ever met a woman whose thoughts were reflected in her eyes? Unexpectedly, desire slammed into his gut and he had an urge to lean down and kiss her. He wanted to know if she tasted as sweet as she looked, which boggled his mind. He tended to date women who knew the score. Females who didn’t expect anything more than a good dinner and good sex. Long nights at the office, even longer nights on assignment, and a constant threat of danger hanging over his head tended to be isolating. His lifestyle and work commitments didn’t allow for relationships…or emotions, and he instinctively knew Mae wasn’t the love-em-and-leave-em type of woman.
* So instead of doing want he wanted, which was kissing her until they were both senseless, he took a few steps away from her and took a deep breath to get his hormones under control. He had to force his mind into thinking like a security analyst again.

Thank you for joining us here today, Beth D. Carter! It was a pleasure getting to know you and your story.