On the Other Side of Lust
The Portal Series Book 1
by Kiki Wellington
Genre: Supernatural Erotica

Coralee never wanted to be a pastor’s wife…and she certainly never wanted the creepy house her husband inherited from his loyal flock. Yet there she was, alone in a passionless marriage, irritated by the constant demands of the church, and uncomfortable in her own life.
Then he showed up. Coralee wasn’t sure where he came from, but she did know he took her to otherworldly heights of sensuality she could never conjure up even in her wildest fantasies. Was he a ghost? A demon? Or the Devil himself? It didn’t make any difference…as far as Coralee was concerned, he was the very answer to her prayers.
From the Author:
ADULTS ONLY PLEASE. On the Other Side of Lust is a 41,900 word story that contains sexually explicit material and adult language. This story is not appropriate for children and may be offensive to some readers.
Warning: On the Other Side of Lust contains closet connections, lascivious lessons, paranormal pleasures, and amorous awakenings.
**Free at all retailers!**
Add to Goodreads
Amazon * Apple * B&N * Google * Kobo * Smashwords

Through the Doorway of Desire
The Portal Series Book 2

Although most people believe 28 Riverhill Road is the keeper of not-so-buried secrets they’d just as soon forget, for Clarissa, the old house represents an opportunity for a new life.
That is, until the macabre obsessions set in. When she’s not trying to unearth the mysteries of the house, she’s stoking the flames of a sexual obsession with a notorious serial killer that’s been dominating the news. And when these fixations collide, she’s introduced to a passion unlike anything she’s ever known. Clarissa may be enjoying herself now, but will her ecstasy ultimately lead to agony?
From the Author:
ADULTS ONLY PLEASE. Through the Doorway of Desire is a 41,400 word story that contains sexually explicit material and adult language. This story is not appropriate for children and may be offensive to some readers.
Warning: Through the Doorway of Desire contains legal lust, seance chicanery, and convertible coitus.
Add to Goodreads
Amazon * Apple * B&N * Google * Kobo * Smashwords

The Entry to Ecstasy
The Portal Series Book 3

Despite its dubious reputation, Charlotte falls in love with 28 Riverhill Road and believes buying the old house will bring excitement into her life–and help revitalize a relationship that has long gone stale.
And she does find the excitement she’s looking for when the peculiar house introduces her to an alternate life filled with the love and sexual intensity she’s been craving. As she straddles the edge of fantasy and reality, Charlotte eventually finds herself being forced to make an impossible choice.
From the Author:
ADULTS ONLY PLEASE. The Entry to Ecstasy is a 25,700 word story that contains sexually explicit material and adult language. This story is not appropriate for children and may be offensive to some readers.
Warning: The Entry to Ecstasy contains sensual scents, mysterious missives, and a passionate parallel plane.
Add to Goodreads
Amazon * Apple * B&N * Google * Kobo * Smashwords
Get the Full Series Boxed Set!

When Patrick stumbles across a maid at La Petite Morte Club watching a couple have sex, he can’t keep his hands off her. She’s cute, sexy and kinky – just the way he likes his women.
Until he discovers that she’s the younger sister of one of his best friends which means she’s in the “hands off” department.
Annie is tired of guys staying away from her because of her overprotective brother. She’s determined to convince Patrick that she should not be off limits and that his hands should definitely be all over her body.
This is a HEA standalone series meant for eighteen and up.
**On sale for .99 cents!!**
Add to Goodreads
Amazon * Apple * B&N * Kobo

Ellis O. Day grew up with her nose buried in books and now enjoys writing the kind of stories she loves to read. Romance—the steamier the better. She believes that the cornerstones of all great romantic relationships are: love and friendship, trust, attraction and fabulous sex. Her stories contain all of these (especially the last one).
Facebook * Twitter * Amazon * Goodreads

Thank you for hosting me with new release MM romance Hidden Magic.
I had this story in my head for months before I started to write it. The elf, Owain Lovage, was so clear in my imagination but not his lover to be. Rowan kept disappearing and then reforming. I knew he had to be special because Owain is so sure he can never have a human partner.
Owain is lonely but he’s a happy soul, already in love with nature and as much as Rowan stirs him as they meet, Owain is calm and takes the love poured out to him from Rowan like gifts.
Rowan is highly sexual and used to taking what he needs from the men he meets. He pursues Owain from the start, but as soon as they connect, he’s lost in a pull of attraction he’s never felt before. He falls in love with Owain long before he knows it.
There’s a twist, as always, in my romances and of course a happy ending. I hope you enjoy the passion between these two men and the fun in the build to the end where I allow life to play tricks on them the way we all know it can.
Warning: This MM love story contains, MM sex, rimming, frottage, in the frequent love scenes
Paranormal gay male romantic erotica, Hidden Magic, 114 pages
On launch special at Evernight Publishing
http://www.evernightpublishing.com/hidden-magic-by-e-d-parr/
Available Amazon US https://www.amazon.com/dp/B0786SVL37
Available all other Amazon sites: Global link http://a-fwd.com/asin-com=B0786SVL37
Siren-Bookstrand http://www.bookstrand.com/hidden-magic-mm

Read a Teaser
* “I should get home.” Owain closed the trunk and walked with Rowan to the cottage.
* Rowan led the way down the hall and into the dining room where he placed the box he carried on a long table. “Why, Owain? Is someone there waiting for you? Do you have a boyfriend?” His cock still strained against his jeans, and he ached to hold Owain close. It was as if he’d already become addicted to the gorgeous man who glanced at him with his sexy dark eyes.
* Without answering, Owain carefully placed the box of mistletoe on the table.
* Rowan gazed at Owain. He had to know right then if this man was available. “Tell me.”
* Owain’s eyes filled with what looked to Rowan like pleasure and amusement—a strange mix of emotions.
* Rowan smiled, happier. “Please.”
* “I have no one waiting for me. I don’t have a boyfriend, lover, or partner. I have somewhere to be, though. There’s always a family gathering for Yule. People come from across the country. I always help plan it.” He smiled and touched Rowan’s arm. “We could meet tomorrow.”
* The smile and suggestion sent waves of happiness over Rowan. “I’ll come out to the car with you. We’ll make arrangements.” He followed Owain to the driver’s side of the SUV.
* Owain leaned against the door and held out his arms.
* Rowan’s heart leapt as he saw the gesture. There was no one to see, and he surged into Owain’s arms, pushing his cock on Owain’s hard body. “You’ll never know how welcome this is, to press against you, to have you hold me. Owain, I want you so badly. I can’t believe it.” He murmured the words a breath away from Owain’s lips—then Owain kissed him. It was like falling into a soft, sexual haze that lifted him from his feet. His eyes closed, heavy with lust, and he grabbed Owain’s hips to thrust his lower body along Owain’s until with a groan he contacted the hard column of Owain’s cock. “You want me, too.”
* Owain left his mouth as Rowan broke the kiss to breathe and speak. He nuzzled one of Rowan’s ears and whispered. “I’m fucking desperate.”
* Rowan pushed his hand between them and pressed his palm on the shape of Owain’s erection.
* “I wish there was somewhere to go now. I wish I could open your pants and suck the cum from you. I’m so hard my cock’s aching.”
* Owain gently put him at arm’s length. “I’m the same, but I must go now. I work at the reindeer farm, that’s my place. In my jacket pocket there’s a business card. Come to see me any time tomorrow. I’ll show you around.” He brought out the card he’d referred to and held it out to Rowan.
* Rowan took it. “I will.” He gazed at Owain. “I never expected to meet you.”
* Owain leaned to his face and placed a soft, quick kiss on his mouth. “I’m glad you did.”
Copyright E.D.Parr 2017 Evernight Publishing 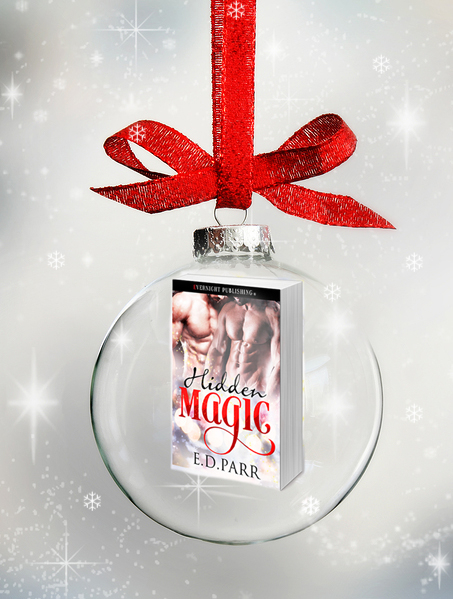