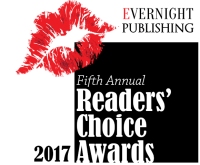 Hi everyone! I wanted to post and let you all know about Evernight Publishing’s Readers’ Choice Winners for 2017. Each year the publisher runs the contest and I’ve been nominated several times but never gained a runner’s up or a winner’s spot. I’m happy to announce all that’s changed this year! A big thank you to my readers for helping my story Transcending Fire win in the Sci-Fi category. Also, a hearty congrats to my fellow authors who have also won. I’m so excited this book has gained recognition. It’s one of my favorites that I’ve written.

I also wanted to let y’all know that Evernight Publishing is running a special on the winning books. Visit the buy link below for the coupon code, and if you haven’t already, pick up a copy of Transcending Fire and the other wonderful stories written by other fabulous Evernight Publishing authors.

A man dealing with an Earth in chaos. A woman from an alternate universe hoping to find her destiny. Two motorcycle gangs and a real bad ass who wants to ruin everything. What’s not to like?

* Hunter Macario wants one thing—a place to belong. When given an opportunity to solidify his position in the motorcycle club, Devil’s Thunder, he takes it.
* Dragon’s Clan member, Safaia King, believes she’s found the man from her people’s legend and her dreams. She has one goal, even if he’s in a rival club—to make Hunter hers and keep him safe so he can fulfill their destiny.
* After Hunter makes a huge mistake, he’s sent to where Safaia lives—an alternate universe called The Den. In this new world, sex, battles, and secrets abound. Hunter must survive The Den to right some wrongs or else he could lose everything he’s ever gained, including his home and Safaia’s love.