* The author and his wife, Joan, live in Hunterdon County, NJ. As a public relations professional he and his firm successfully handled major public issue campaigns, including raising $68 million to build Liberty Science Center, now the nation’s fourth largest hands-on science museum. He is also president of a family-owned water utility. Deception is his third novel. He welcomes speaking invitations and correspondence via email.

I asked him what was the best piece of writing advice he ever received and here is his answer:

* The best piece of writing advice I ever got came in phases. First phase — I attended a Writer’s Digest conference featuring bestsellng author David Hagberg. He had us write a piece and gave it back to me with this scrawled on the first page: “Your scene-setting sucks!” So I hired and went to bestselling author Robert Gover’s sessions in which he showed me what I was doing wrong. After that I went back to Hagberg’s reviews and he told me “Wow! Have you come a long way.” So the writing advice I got from Gover got me rolling in the right direction. 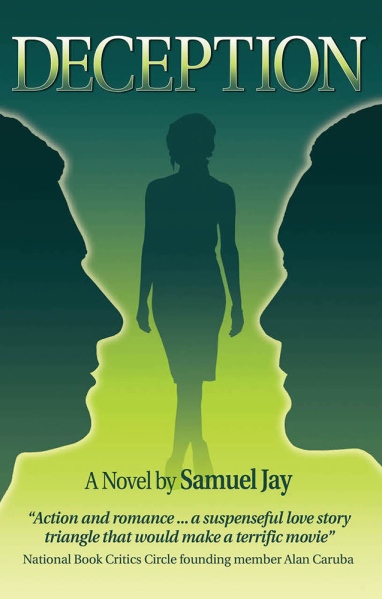 * Lieutenant Jack Morro has just days to go before being sent home from the war in Vietnam. But after inadvertently learning of evidence of a conspiracy involving his captain, he is hit by the captain’s ‘friendly fire’ in the midst of battle. He is left for dead but is only wounded, captured by the Viet Cong, and imprisoned. When Jack is reported killed in action, his fiancé, Diane – a rising New York journalist – plunges into alcoholism. A media giant named Vidal helps her recover, and Diane falls in love with him. But Vidal has secrets – including a connection to Jack’s supposed ‘death.’
* However, Jack is alive, and after a year of imprisonment, he manages to escape. But he comes home to find Diane married to Vidal and his life still in peril from the information he learned in Vietnam.
* Vidal, Jack, and Diane find themselves wrapped in a web of romance, deceit, and danger – and none of them will escape unscathed.

* Manhattan, November 1971
* Standing in the men’s department at Macy’s, Diane Gannon smiled as she enthusiastically fingered her way through layers of folded sweaters to find one for her fiancé, Jack, who’d soon be coming home from the war in Vietnam. Alongside her was future mother-in-law, Grace Morro, also smiling as she held a shopping bag in both hands. Out in the center aisle, heel-clicking women shoppers marched along on their way to Ladies’, some of them peeling off near Diane and Grace into other rows and racks of men’s clothes. Brightening the scene, broad paths of sunlight flowed through the large windows on Seventh Avenue, revealing rows of appealing merchandise as saleswomen stood behind glass counters, chatting with customers or placing clothes in gift boxes.
* Diane stood in low heels, wearing a brown suede jacket over a white sweater and black slacks, her dark, reddish hair pulled back in a ponytail, her sculptured face of fair skin and striking eyes heightened by a cleft in her chin. Holding up a light blue sweater by its shoulders, she looked over at Grace and said, “What do you think, Mom? Wouldn’t this look great on Jack?”
* Wearing a gray overcoat open down the middle, Grace nodded. “Yes, it would. It really would, but I can’t stop feeling nervous about him. Him still over there. Won’t stop ’til he’s home. Two years of worrying. Sorry, hon.”
* Diane lowered the sweater and arched her eyebrows at Grace. “Thirty-five more days and all our worries will be gone! He’ll be home just before Christmas!”
* Grace nodded. “Meantime, he’s still over there, in the fighting.”

Buy Deception here…
Amazon The book will be free during the tour!

Thank you for joining us here today, Samuel Jay! It was a pleasure getting to know you and your story.

ANNOUNCEMENT! Samuel Jay will be awarding a signed copy of Deception to a randomly drawn winner via rafflecopter during the tour! So be sure to leave a comment AND use this RAFFLECOPTER LINK to enter the drawing. Also, visit the other tour stops for a greater chance of winning!