Today we have author Bill A. Brier visiting. Welcome!

* Bill grew up in California and went to Hollywood High School, then served in the Air Force as a combat cameraman.
* After hiring on at Disney Studios as a film loader, he soon advanced and moved on to other film studios.
* He earned a master’s degree in psychology. A big help when working with Trumpish Hollywood producers. You’re fired!
* During his more than twenty-five years in the movie business as a cameraman, film editor, and general manager, Bill worked on everything from the hilarious, The Love Bug, to the creepy, The Exorcist, to the far out, Star Trek and Battle Star Galactica.
* Eight years ago, Bill switched from reading scripts to writing thriller/mysteries and driving racecars. After completing three award-winning novels, he signed with Black Opal Books. His first novel, The Devil Orders Takeout, is about a devoted father and husband who makes a deal with a real-life devil to protect his golf-prodigy son after his wife and older son are killed in a mysterious accident — and pays hell for it.
* Bill’s second mystery, The Killer Who Hated Soup, is Book One in the 1950s The Killer Who series, and it launches this Summer. The Internet? Never heard of it. Smart phones? Who you kiddin’?
* Energetic and eager to make his mark on what Time magazine called the next great boom town, Bucky Ontario leaves his daddy and little sister in Louisiana and rides a bus to Defiance, Oklahoma, a town not particularly adverse to murders, just the embarrassment of them when committed by high officials.
* Book Two, The Killer who Wasn’t There, will be on bookshelves this fall.
* Bill writes every day and golfs infrequently (that damn right knee!). His five children and eight grandchildren keep him busy going to birthday parties, and he never misses a one!
* The Brier Patch is Bill’s wildly entertaining blog about his shameless early days in Hollywood. It’s on his website, billbrier.com, along with a contest linked to The Devil Orders Takeout, which will award the grand prizewinner $1,000.
* Bill is a member of Mystery Writers of America.

* A tax attorney with integrity…a powerful mobster determined to bend his will…
* Grayson Bolt isn’t about to compromise his integrity to help a notorious crime boss escape the cross-hairs of the IRS. But there’s a steep price to pay for defying The Man–Grayson’s beloved wife and older son.
* There’s only one way for Grayson to prevent his younger son, Jim, an innocent golf prodigy, from also being taken out: play a dangerous game of cat and mouse. And what will Jim be forced to do when the woman he loves gets ensnarled in a web of betrayal and deceit? 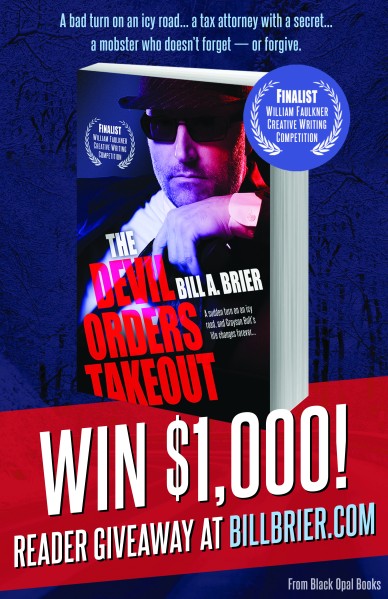 * “I’m afraid you’re going to get it hard, Mr. Bolt.” Costanzo had that fatherly tone of this will hurt me more than you. “Did you ever stop to think that there’s only one way of being dead, but many ways of dying?”
* Grayson felt something cold touch his spine, all the way down. “I don’t follow.”
* “Take your man Stockard. He killed two of your beloved family members, wife and eldest son. Isn’t that right?”
* A strangling tightness gripped Grayson’s throat. “That— that’s right.”
* “Wouldn’t you say a part of you died too?”
* “What’s your point?” Grayson’s voice erupted in suppressed panic.
* “You don’t have to die to feel dead. I’m going to kill your other son. That’ll be your punishment.”
* The blood drained from Grayson’s face. Just like that. Most people held the basic principle that no man should be punished for the deed of another. Costanzo was not one of them. Grayson would be cut right to the bone, and his son would be the sharpest knife Costanzo could use. Costanzo had spelled out the thought in invisible brushstrokes. It was there and Grayson had tried not to see it.

Thank you for joining us here today, Bill A. Brier! It was a pleasure getting to know you and your story.

ANNOUNCEMENT! Bill A. Brier is awarding to a randomly drawn commenter a $25 Amazon/BN GC! So be sure to leave a comment AND use this RAFFLECOPTER LINK to enter the drawing. Also, visit the other tour stops for a greater chance of winning!