* Bestselling author Ella Quinn’s studies and other jobs have always been on the serious side. Reading historical romances, especially Regencies, were her escape. Eventually her love of historical novels led her to start writing them. She has just finished her first series, The Marriage Game, and her new series, The Worthingtons, began in April 2016.
* She is married to her wonderful husband of over thirty years. They have a son and two beautiful granddaughters, and a dog. After living in the South Pacific, Central America, North Africa, England and Europe, she and her husband decided to make their dreams come true and are now living on a sailboat cruising the Caribbean and North America. Europe is next! 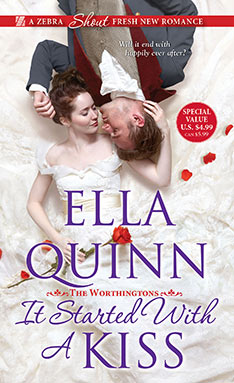 * What is a young Worthington woman to do when the man of her dreams is not who she thinks he is?
* This season, all eyes are on the Earl of Worthington’s spirited, beautiful sister, Lady Louisa Vivers. Many gentlemen are vying for her attention in and around the ton. Yet, Louisa longs for someone who can take her beyond the ballroom—a man who is worldly, adventurous, and passionate. She won’t settle for just any suitor. She wants her true soul mate—and she’ll know him when she sees him.
* Is Gideon, the Duke of Rothwell, him? The moment he and Louisa meet, they share a powerful attraction. Rides at sunrise and waltzes at dusk follow. Finally, Gideon can no longer resist the urge to embrace her, and Louisa is sure he will ask for her hand. But Gideon believes he is in no position to marry. The Rothwell estate has gone bankrupt, a scandal simmers in its wake, and he has nothing left to offer. Now, he must decide if he will let pride stand in the way of true love—or if he will risk everything, and let the lady decide for herself…

* “Rothwell.”
* A pair of showy dark bay horses drew even with him, followed by an extremely fashionable curricle.
* “Bentley.” Resisting the urge to smile, Gideon raised his quizzing glass, reviving a long-standing joke between him and his cousin. “When are you going to learn to select decent horseflesh?”
* “If you really cared,” Bentley retorted, “you would have been here to help me, and not off in Canada dressing in bearskins or whatever it is you wore over there.”
* The carriage came to a stop.
* “Harrumph,” Gideon scoffed. “While you are here and obviously have nothing better to do, I would appreciate a ride to Doctors’ Common.” He needed to tell Templeton about this latest development. Not waiting for his cousin to answer, Gideon climbed onto the curricle. “You may also tell me what is so urgent I must drop everything and come to Town immediately. As it is, you’ve left me kicking my heels for two days.”
* Bentley started the horses, but immediately turned to face Gideon and dropped his ribbons.
* “Watch what you’re doing!” He grabbed the reins from his cousin’s slack fingers.
* “Blast. I forgot.”
* Bentley reached for the ribbons, but Gideon shook his head. “I think I’ll keep them until you’re finished.”
* His cousin heaved a sigh worthy of Drury Lane. “I am in love, and I need help convincing her to marry me.”
* Gideon loved his cousin like a brother, but he had no idea how he could assist in matters of the heart. Then again . . . “Happy to do whatever I can. Who is the lucky woman?”
* “Didn’t I tell you?” Bentley asked, surprised.
* “No,” Gideon replied with all the patience he could muster. “I received a letter from you telling me you needed my help, but you failed to give the reason.”
* “You probably don’t know her in any event. She came out just this year.”
* He raised a brow, hoping to hurry his cousin along.
* “Lady Louisa Vivers.” Bentley said her name as if she was the sum of all his dreams.
* Hell and damnation! Could my luck get any worse?

Buy It Started With a Kiss here…
Amazon | Barnes & Noble

Thank you for joining us here today, Ella Quinn! It was a pleasure getting to know you and your story.

ANNOUNCEMENT! Ella Quinn will be awarding an Autographed ARC of IT STARTED WITH A KISS (US Only) to 5 randomly drawn winners via rafflecopter during the tour! So be sure to leave a comment AND use this RAFFLECOPTER LINK to enter the drawing. Also, visit the other tour stops for a greater chance of winning!