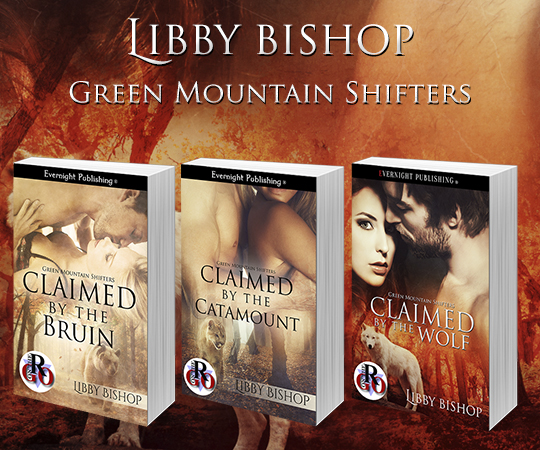 * Libby Bishop is my pen name for my paranormal romance/erotic alter ego. I write dark fantasy/horror under the name October Weeks.
* I love reading, writing, movies, Lindt dark chocolate, autumn, the SyFy Channel (Haven and Bitten!), and spending time with friends and family. I have one fat, fluffy cat who thinks she’s queen of the house…and really, she is.

* When Katee Ellis wakes up naked in a strange bed, unable to recall the events that led to such a state, she understandably begins to panic. The appearance of a man she doesn’t know deepens her concern. She soon learns that she was attacked by a wolf, and will become one within a week’s time. After being human for so long, she doesn’t know how she’ll manage to make that adjustment.
* Mathias Blackwell—the strange man, and powerful wolf shifter, who told her of the attack—eases some of her worry. His presence calms her, and makes her feel safe. Their instant attraction grows stronger the longer she’s with him. He promises to protect her against the wolf who attacked her, who also happens to be his brother. She believes him. But his brother has already gotten her away from her loved ones once—can he do it again?

* “Hey, Good Lookin’” by Hank Williams greeted Katee Ellis as she woke. Her head pounded, and her mouth was dry as if she had the worst hangover ever. Yet, she couldn’t recall drinking the night before.
* As her eyes cleared, she realized she didn’t recognize the ceiling, its chipped and peeling paint. She sat straight up, her head swimming as nausea swept her from the movement. Placing her hands on both sides of her head, sinking them into her hair, she closed her eyes and tried to take deep breaths. When the nausea faded away, she opened her eyes, and then she realized she was completely naked.
* What the hell?
* She quickly pulled a sheet up and held it at her breasts, trying to figure out how the hell she’d gotten into a rumpled bed in a worn down bedroom.
* Hank continued to sing as heavy steps from outside the room caught her attention—she inhaled, scenting the wild. Wait. She inhaled again. Shock coursed through her when she realized she could smell everything around her—the old wood, the man coming toward the room, the cool mid-autumn breeze coming through the barely opened window.
* Her heart skipped a beat, and then sped up as panic began to take hold. She dug for a memory to tell her how she’d gotten where she was, but nothing came, which alarmed her more. Through shapeshifting friends she knew what the situation could mean … and she tried her damnedest to calm down, to shove the panic down as her blood pounding in her ears blocked out all other noise.
* What the hell happened to me?
* “Here, this should help.” The man’s voice was deep, with a British lilt. The sound snapped her back to reality.
* She held the blanket closer, tighter.
* She looked over slowly, pushing her long, dark red hair out of her eyes. Her gaze settled on a tall, lithe, muscled man. His thermal, long-sleeved shirt clung nicely to his torso. Her sharp vision could plainly see that strong arms were hidden underneath the fabric.
* He stepped closer to her, holding out a mug to her. After holding his dark blue gaze for a moment, she reached out and took it. The heat from it felt good as it spread beneath the skin of her hand. Coffee.
* As the man moved to the desk and grasped a chair in one hand, she inhaled the scent of the beverage. Heaven. Taking a sip, she tasted the slight bite of whisky, which made her smile softly.
* “A little hair of the dog never hurt.” He returned her smile as he set the chair down and took a seat, running a hand through his hair before leaning forward and resting his elbows on his thighs. His body language was telling her something was wrong, but since she was still a little off balance she didn’t ask right off.
* “No,” she replied. Taking another sip of coffee, she held the sheet with her other hand. She wasn’t a prude, but she didn’t know this man. “How did I get here? And where is here? And more importantly, who are you?”

Thank you for joining us here today, Libby Bishop! It was a pleasure getting to know you and your story.