* Tory Richards is a fun-loving grandma who writes smut. Born in 1955 in the small town of Milo, Maine, she’s lived most of her life in Florida. Today she lives with her daughter and her family. She has her own woman-cave which she shares with four felines whose main goal in life is getting as much cat hair on everything that they can.
* Penning stories by hand and then on manual typewriter at the age of thirteen, Tory was a closet writer until the encouragement of her family prompted her into submitting to a publisher. She’s been published since 2005, and has since retired from Disney to focus on family and writing. 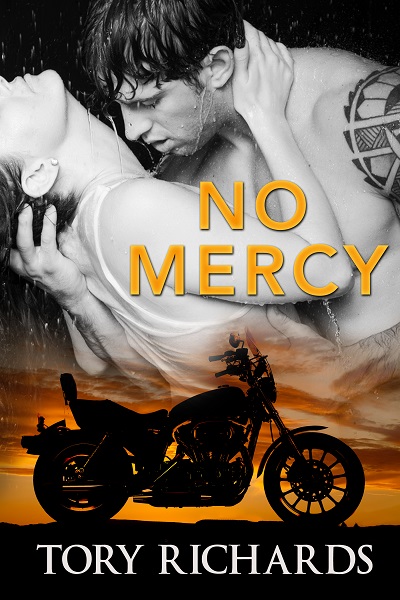 * Club trouble won’t keep Rock from bringing his son and Allie home.
* Rock’s the VP of Phantom Riders MC. Dangerous. Unpredictable. Ruthless. A killer who’ll stop at nothing to keep what’s his. And he wants Allie and their son.
* Allie had given Rock her virginity, and then ran away when she got pregnant. Seven years later he shows up at her door, demanding his son, and claiming her.

* I began to follow, but Rock stopped me. Our gazes clashed. “Did he touch you?”
* I opened my mouth, thinking about the man’s hands on my hips, but then closed it again. It was so minor it didn’t really warrant mentioning. “Not really. We weren’t dancing together, Rock. I thought I was alone until I turned around and he was just there.”
* His gaze ran down the length of me before returning to my eyes. I could tell that he liked what he saw, yet his next words contradicted the lust in his eyes. “You come out looking like that and think you’re going to be left alone?”
* My jaw dropped, and I glanced down at what I was wearing. I didn’t get a chance to dress up much, so I’d gone all out with a tiny, black, figure-hugging dress, the kind that never goes out of style, and fire-engine red stilettos. The front was cut low and showed off the generous swell of my breasts, but it wasn’t indecent. The length was short, above my knees.
* I frowned. “There’s nothing wrong with my dress. Look around you, Rock. There are plenty of women here showing a lot more skin than I am.”
* His gaze didn’t leave mine. “None of them are my woman,” he growled, pulling me behind him to the table where everyone else had already sat down.
* His woman? Under the circumstances I thought it best not to resist him, even though he was treating me like a wayward child. I sensed that something more was going on than just his issue with what I was wearing, so I pressed my lips and let him drag me back to the table.

Thank you for joining us here today, Tory Richards! It was a pleasure getting to know you and your story.

ANNOUNCEMENT! Tory Richards will be awarding a $25 Amazon or Barnes and Noble GC to a randomly drawn winner via rafflecopter during the tour! So be sure to leave a comment AND use this RAFFLECOPTER LINK to enter the drawing. Also, visit the other tour stops for a greater chance of winning!