Is the man she now needs more than ever!

Heir to his family’s global empire, branding genius Miguel Astacio turns everything into marketing gold. Only his best friend’s sister seems immune to his magic touch. Until Tanya Carrington comes to him to save her floundering nightclub. Miguel is ready to rectify past mistakes. But will his supreme sacrifice win the heart of the woman he loves?

Miguel’s blood heated as she gave him a wavering smile. She was just too beautiful, with clear skin marked only by a dark mole at the corner of her nose, angled dark eyes and full lickable lips.

“I mean,” Tanya continued, “I won’t even be able to recognize the place when its completed. Everything sounds incredible, but I may have to draw the line at the cages for dancers.”

He thought she might. “Trust me, if we charge people to dance in them, they will pay. The one rule is that they have to keep their clothes on.”

“We’ll see.” She stared at the screen again with her eyes unblinking “Um…” She rubbed the back of her neck and a light sheen of sweat broke out on her forehead. “How much will this cost?”

Now for the heavy convincing. He got up and stood beside her to point at the CCTV screen showing the dance area, which had filled up a little more in the hour they’d been going over his ideas. “I can see this place packed, people waiting all the way up the street trying to get in. VIP area filled with actors, musicians and pro athletes flying in to experience it.”

Unable to resist, he leaned close so they were almost cheek to cheek. Her heat and honeysuckle perfume floated into him, and he turned his head so his starving lips could caress her one more time. He kissed along her jaw until he met the sensitive area of her neck, where he teased her with gentle nips until she moaned. She sprang as far away from him as the room would allow.

What had he been thinking? Why did she affect him this way? She took away his willpower like no other woman had ever done. Thinking became almost impossible when she was around. The desire to smooth his hands over her incredibly silky soft skin drove him to get closer, but he stayed rooted to the spot, watching her rub the goose pimples from her arms.

“Answer the question, Miguel.” He was pleased to hear her voice quiver. “How much will it cost?”

He’d rather discuss the turbulent heat swirling between them, but if she wanted to ignore it then he should, too. “You’ve heard the saying that you have to spend money to make money, right?”

Her slow nod brought her hair forward. He watched as she brushed back the strands he wanted to filter his fingers through, bringing her close so they could fall into the attraction drawing them together. 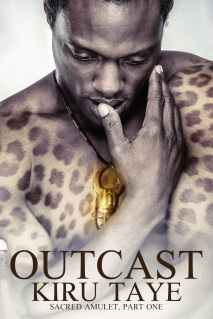 OUTCAST (Sacred Amulet, Part 1)
Ugo’ji
is an outcast, an untouchable. She lives on the fringe of society as the lowest
of the low, a living sacrifice to the gods. The only person she interacts with
is her aged grandmother who nurtures her powerful gift of healing. Until the
day she meets Ebube a strange warrior to their lands. He ignites a yearning
within her she’s unable to ignore.
Ebube
is drawn to the young maiden with the emerald green eyes who possesses the body
of a goddess and the healing touch of an angel. But he is forbidden from mating
with a human and the consequence is the wrath of the gods.
Moreover
he is on a mission. If he fails, the gates of hell will be opened and the earth
plunged into darkness. He cannot stay and she cannot go with him.
EXCERPT
A
twig snapped. Ebube froze for a heartbeat. Unsure of what was approaching, he
reached for his scabbard still strapped to his hips.  Without making a noise, he withdrew the
dagger in a slow fluid motion. The trees and shrubs around him provided some
cover for him. He wouldn’t be seen until he was ready to attack.
Footsteps
walked in his direction. Human? Knife poised to strike, he manoeuvred his
aching body into a crouching position.
As
the leaves of the shrubs in front of him parted, he swung his leg out tripping
the creature. The person tumbled down onto the ground beside him and he
pounced, his dagger already on its downward motion.
Then
he froze.
It
was a young woman.
“No!”
Her scream rent the air as his arm stopped mid-swing. His grip on his weapon
tightened. His other hand held her side down firmly. Soft, smooth, warm skin
trembled beneath his palm.
He
stared at her, fixated by her allure. The shape of her face reminded him of an
eagle’s egg, beautiful and fragile, full of inner strength. Eyes the vibrant
green of okra twirled in the cream of ukwa stared back at him with fright. They
held him captive and he fell into their depths, barely aware of his increased
breathing and heart rate.
Mine.
For the first time today, his spirit beast roused, alert and pushing to get to
the fore.
What?
The feral creature living in him had just laid claim to the maiden which made
her…  Mine. The word whispered again in
his mind.
This
girl was his bond mate? The woman destined to be his life partner? This
couldn’t be. She was human. Her life force undulated beneath his skin as proof.
He
was Ure, part human and part god. A supernatural being. He wasn’t permitted to
bond with humans.
But
his spirit beast had never risen before without the amulet to connect them. Yet
it had done so on this occasion.

SACRIFICE (Sacred Amulet, Part 2)
Mating an outcast requires a
blood sacrifice.
Ebube
has rejoined his warriors on the hunt for the sacred amulet but his heart is
left behind with Ugo. He’s focused on completing his task and returning to her
quickly.
Ugo
has found a new confidence since Ebube’s departure. After saving a child’s
life, she is now in demand for her skills and those who had previously ignored
her now take an interest in her. Her quiet moments are preoccupied by thoughts
of Ebube’s return.
But
the gods are not so forgiving or forgetful and they will demand a high price
for Ebube’s and Ugo’s disobedience.
EXCERPT
Ebube’s
favourite dream involved waking with Ugo beside him in his home on the Amauwa
settlement.
There
they had a good, simple, and happy life. Peace in the realms and the warriors
at home.
She
placed a kiss to his face, the tip of his nose and his closed eyelid before
whispering, “good morning.”
Half
befuddled with sleep he reached for her, hand settling on her hip as he
struggled to stay still, needing her in ways that he couldn’t always express.
“The
morning is good because you are here,” he replied in a voice still gruff from
the night.
“You
are awake,” her voice was filled with amusement.
“I
am now.” He cracked his eyes open and filled them with a vision of Ugo dappled
in dawn’s grey light.
A
smile played on her lips even as strands of her braided hair brushed over her
shoulders and plump breasts.
He
trailed his hand down her smooth back over the curve of her waist to her wide hips
and pliant buttocks swell over long legs that he now pulled down on either side
of his so that she sat astride of him.
In
the time that he’d known her, her body had ripened from that of a girl into a
woman.
He
had always been a man ready to go to war to protect the realms. Ready to put
himself in danger and journey to whatever lands his missions took him.
Now
he wanted to stay close to Ugo. To have her as a constant in his life. He
couldn’t imagine a future without her. A mate to share highs and lows and make
family.
“Now
that you’re awake, my warrior, what would you like?” She rolled her bum over
his groin.
His
breath hitched as he hardened.
“Precious,”
the endearment was hardly more than a groan on his lips.
She
had never been this bold before.
He
glanced up to find her smirking as she rolled her hips again. “Yes, my warrior.
I have exactly what you want.”
BOOK LINKS
Amazon
US: https://goo.gl/F2V4u9
Amazon
UK: https://goo.gl/RTsSCQ
Okadabooks: https://goo.gl/Ag2EYT
Smashwords: https://goo.gl/4GrWeJ
All
Buy Links: http://www.kirutaye.com/sacrifice
Add
to Goodreads: https://goo.gl/kMtz6r