Bringer of Chaos: Forged in Fire
The Sempervian Saga (Book 2)
by Kayelle Allen

Humans created the Ultras, a genetically enhanced race, to defend mankind. Instead, Ultras became their greatest threat. With the help of traitors, humans captured half a million of the immortal warriors.

Exiled to an alien world with no tech, no tools, and no resources, their leader, Pietas, must protect his people, find food and shelter and unite them. But before he can, he must regain command from a ruthless adversary he’s fought for centuries–his brutal, merciless father.

Ultras are immortal, and no matter how they die, they come back. Reviving after death isn’t all it’s cracked up to be. Some wounds heal instantly and a few take time, but battered and broken trust? Immortals may heal, but a wound of the heart lasts forever.
Genre: Science Fiction with romantic elements
Rating: PG13 for violence, no profanity or explicit content

Amazon Pre-Order Link
A Thunderclap campaign has been set up, we sure would appreciate your support. Please click here to add your support. 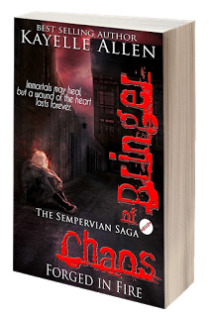 In this scene, Pietas performs a ritual with the help of his friend, Six.
Pietas’s long hair, full of static electricity from the wind and storm, settled over his shoulders and adhered to his neck. He could not lift his arms to gather it himself but he did not want the others to see he needed help nor did he want Six fretting over it.
The man blamed himself for the injury. Yes, Six had bound Pietas. It had been Six’s duty to do so. In truth, those who had placed Pietas inside the pod and refused to release him were to blame, but no matter how often he reminded Six of that, the ghost refused to relinquish his guilt.
Six dug into his pockets. “I think I have another strip.” They had torn several from a ragged shirt. Six wore the biggest piece around his neck. He set down his pack and opened it.
“Six,” Pietas hissed. He did not turn his head, but looked toward the others. “Leave it!”
The ghost glanced up at him, then the immortals, waiting ahead. “You want the women messing with your hair? Is that it?”
He closed his eyes, counting to ten. To a hundred would not erase this embarrassment. “No.” When he beheld Six, the man had the discourtesy to smirk. “Don’t look at me in that tone of voice.”
The man chuckled. “We should have cut your hair before we set out.” He rummaged through his kit, which held all Six owned when he’d been abandoned on this world. Little more than survival gear.
“I never cut it except in ritual.”
“I know.” Six withdrew a boning knife used for it.
Before every battle, Pietas performed the solemn rite to affirm superior strength and prowess. The ghost had been the first human to see it carried out, albeit the first half from a distance while hiding.
Six stood. “Maybe you could perform it now.”
“How like you to see the easy solution. But there are a few elements missing. No fire. No water. No mask.” He gestured toward the oncoming storm. “No time.”
“Haven’t you ever heard of pretending?”
“One cannot ‘pretend’ a ritual.”
“What a boring childhood you must’ve had. Why not?”
Pietas opened his mouth to answer. Shut it again.
Six lifted one eyebrow. “Do you want to go into that dark hole and meet up with your people without performing it?”
“No, but there’s no time.”
“Rain’s coming.” Six jerked a thumb toward the forest. “Like I said, you have to go in there or you won’t reunite with your people. Are you going to stand out here making excuses, or do this?”
“Ghost, this ritual is important. It deserves respect.”
“Blah, blah, blah. That storm is bearing down on us.” A few drops of rain splattered them both. “See? Or maybe you’d rather have your sister help you with your hair every morning.”
“Fine!” With a resigned sigh, Pietas capitulated. “How do you propose we ‘pretend’ my ritual?”
Six tucked the knife into his belt and held out his cupped hands. “This is fire.”
Pietas hesitated.
“Come on, Pi.” Six wagged his cupped hands. “This stuff is hot.”
“Of course it is.” A smile slipped onto his face and refused to leave. “It’s pretend fire. That’s the hottest kind.”
“Remember, you do this naked. Unzip your robe or whatever it is you’d wear.”
Pietas mimed removing his silk robe. He plucked one hair and laid it across Six’s hands, feeding it to the fire. “As fire has victory over life, so I have victory over my enemies.” He passed a hand through the imaginary flame. As he had in the real ritual, he hissed at the scorching heat. He cupped his hands over Six’s, a symbolic end to the flames. “I am powerful, as fire is powerful.”
“Next is air, right?”
“Yes.” He lifted both hands, made fists, and yanked them back. “I own the wind. I prevail over the breath of my enemies.”
Again, Six cupped his hands. “Water.”
“Water submits to my presence the way enemies submit to my will.” He scooped his hands into the bowl, lifted his arms and pictured the liquid dripping down them. “The blood of my enemies trickles into the pool of time, is absorbed, and forgotten.” He bent and pushed both hands through his hair. “My mind is clear. I do not waver.”
Six held his hands flat, waist high. “The pond.”
Pietas ducked as if to submerse himself, then rose, throwing back his head. “My body submits to my will. No pain defeats me. No fear touches me.” He brushed his hands down the length of his body. “My will is absolute. I am bigger than any fear. I prevail in every circumstance. I face every foe. I vanquish every enemy. I overcome. I am indomitable. I am invincible.”
“Black face paint for the mask.” Six held out his hands.
The ceremonial mask represented a splash of blood across his face received during battle. Dipping two fingers of each hand into the bowl, Pietas outlined a bandit’s mask up over his dark eyebrows to the area beneath his eyes. He brushed his fingertips over his eyelids and met Six’s gaze.
Finding a mixture of awe and respect threw him out of the moment. He faltered, unable to recall what came next.
Six offered the knife hilt first.
The man had seen the ritual performed once, from a distance, yet he’d remembered each step. Six wouldn’t have known the next part was performed by Pietas’s sister if no trusted partner or friend was at hand. The time Six had seen it done, Pietas had not yet considered him either one.
How wrong he had been. The man was more than both.

Bringer of Chaos: The Origin of Pietas

Why should Pietas end the war with humans?

His people are winning, yet they insist on peace talks. The Ultra people want to grant humans a seat on the Council. Pietas ap Lorectic, Chancellor of the High Council, War Leader and First Conqueror, disagrees. What’s best for mortals is oppression, control, and if necessary, elimination.
Pietas seethes with rage at the idea of human equality. Humans might have created Ultras, but the creation has far surpassed the creator. Humans die. Ultras are reborn, no matter how grievous the injury. They have no equals.
His people permit him no choice. He must attend these insipid peace talks on Enderium Six and what’s worse, be polite. To humans.
When a human special ops warrior is killed in battle, he’s resurrected in a secret process and inducted into the Ghost Corps. He’s given enough strength to perma-kill immortal Ultras. Ghosts are the most hated and feared of warriors.
When the ghost entraps and captures Pietas at the peace talks, the two begin a long journey toward Sempervia, an isolated and forgotten world. Once there, Pietas is marooned and the ghost abandoned alongside him. The two must either fight to perma-death, or join forces to survive.
As Pietas comes to trust the human, an unlikely and awkward friendship begins. Until he discovers how ghosts are resurrected…
Amazon Buy Link

Free — download Endure, Illustrated Quotes by Pietas (as told to Kayelle Allen). Enjoy an exclusive collection of quotes on the concept of endurance by the man known to other immortals as the Bringer of Chaos. https://kayelleallen.com/media/30-days-endure.pdf

Download a free adult coloring book you can print and share. Relax and color with friends. It’s fun! https://kayelleallen.com/media/pietas-coloring-book.pdf